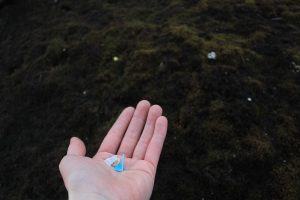 Captain Joachim of the Antigua talks about pollution in the Arctic and how tourism helps to clean it up.

Transcription from interview with captain Joachim [16-10-2016], unedited:
“The beaches which we visited with the Antigua are the cleanest ones that there are in the Arctic. Everything else is more polluted. It is not tourism which is causing the pollution; the tourist sector has interest in clean beaches. There are cleaning projects and with the Antigua we are picking up 15 to 20 cubic meters of garbage every season. That sounds like a lot, but comparing to what we see it feels like very little, because there is so much.

Industries and fishing is causing the pollution. They have the most garbage, starting out with the big fishing nets. We picked up nets that covered all of Antigua’s deck, if you spread them out they’re 100 square meters big and weigh a ton. These nets are really dangerous because sea mammals drown and reindeers and polar bears get stuck. Polar bears get stuck with their ear-tag. Every polar bear needs to be registered and has to have an ear tag so it can be tracked. The ear-tag gets stuck in the net and we have seen polar bears with huge nets hanging on their ear so they couldn’t move anymore without ripping off their ear. The Antigua reports on the trapped animals they encounter to the local government in Spitsbergen (Sysselman), frees animals and collects nets.

Once we found a reindeer stuck in an old generator from World War II and we freed him. A lot of nets are lost by fishing vessels when they fish too much and the nets get so heavy that they can’t pull them up anymore. We see also a lot of nets that are tied up so they float on the water. This means the nets were intentionally thrown overboard, to be disposed in the sea. The ocean is used as a big garbage bin. Fishers don’t have respect for the ocean anyway because they’re taking everything out of the ocean. Fishermen complain they can’t catch enough fish anymore, but nobody stops fishing.

However, pollution up here is done by everyone. The fishing industry has a big part in it, but tourism as well. We are here and we are leaving an ecological footprint, every one of us does.”