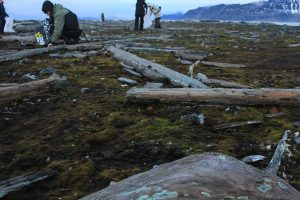 Climate change is a serious topic. How should one go about it to make more people interested? One artist co-created the “Glacial Risk Management Institute” to educate the wider public on climate change using a twinge of humor.

Transcription from interview with Leigh [09-10-2016], unedited:
“One idea is to make a video telling how it will be in the future to make people aware of what is happening today. So in the video I would show there is acid rain and you can’t go outside, or you can’t swim in the ocean. What if there are different creatures in the ocean, or there is fish you can’t eat, or lobster, or whatever. It would be really different.

I feel like we’re watching a disaster in slow-motion. There is this contradiction that people feel helpless to stop it even though they are actively participating in it. So I think that people feel like they are powerless to change their environment, while at the same time they are changing their environment radically. I think we need to think of not our own generation but the generation in front of us, and I think that we’re only stewards. I think the way the economic system is set up is essentially false. We seek to make money, even though we destroy the environment in ways that affect everybody. The numbers don’t add up at all. It doesn’t make any sense.

I am thinking about how I feel powerless and how do I try to make a change. I think part of it is by telling this story, for me anyway. But I try to really balance it by not trying to beat somebody over the head, but I want to do it with effect instead… I don’t think data is enough, or facts. I don’t think that resonates with people. You nee
d stories that are powerful in terms of transformation.”