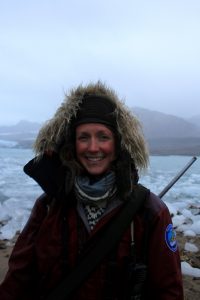 What makes people move to Spitsbergen? Read about the reasons to start guiding tourists in Spitsbergen.

Transcription from interview with Marte [14-10-2016], unedited:
“Spitsbergen is giving me joy wherever I go. I feel like every valley and every stone is beautiful. It might be because Spitsbergen is a limited area, with a limited amount of birds, stones, fauna to become acquianted with. Spitsbergen is kind of project that is exactly long enough to fill a life. Maybe Spitsbergen is possible to go through during a life. And therefore my life motivation has gone up so much. One of the concrete things I like so much is the geology. There are very clear layers in the mountains which make them so different from the mainland mountains. That is a magical thing. And the old miner installations. It is not that I automatically get happy, but it feels very right to be here. It feels like where I am supposed to be somehow. I can explain it with an example. One of the guests of the ship spent the night in a trappers cabin with two of our guides. I went there in the morning to pick them up and I was a little bit tired and stressed. But then I got in the trappers cabin and I realized, that I can, if I want to, live in Spitsbergen and go to all these trappers cabins. Then I got all these dreams in my head where I was going places and exploring. Exploring new places is making me really happy. I love it when I go somewher new and I get to fill out one of the empty spots in Spitsbergen. That makes me superhappy. It also makes me superhappy to have found the man of my life here in Spitsbergen. It is so nice my love dreams can go together with my explore Svalbard dreams.

The story which touches me the most is about the trapper Hilmar Hunes, one of the biggest trappers up here. He is dead now. He was here for the first time in 1909 when he was around 18 years old then, and spend altogether 38 winters here. He became quite a character in mainland Norway. He was in the magazines and interviewed in the newspapers. This trapperman, up in Spitsbergen. He was so important because he build a lot of trappers cabins (40), fixed existing ones (20) and also smaller satellite stations. He was the first trapper to use dog sleds efficiently.

During one of the very last times at his old trappers cabin a journalist came to interview him. They walked out the garden towards the tundra. Geese flew over and reindeers were running in front of them. And Hilmar remains silent, until he suddenly turns around and says: “I will always remember that freedom out on the tundra”. Then they continue to walk back to the house of Hilmar and see a snow bunting. When the journalists walks to his car, Hilmar walks with him and gives him a suitcase. He gives him the suitcase, saying “this is my story, also from other trappers. Do something with it.” Later Hilmar wrote a long letter to the journalist, describing how he will never forget the time in the trapperscabin and how thankful he is for everything Spitsbergen has given to him. It is really touching to read that letter. Back in Norway the journalist describes how tears are running from his face when a snow bunting lands in his garden and takes off to go to Spitsbergen.

I love how close you get to Hilmar. And how he witnessed all there is of Spitsbergen, being here for so many years. How it all ends with all those feelings. I really get touched by that. “I always remember the freedom out on the tundra”. I think it says a lot about Spitsbergen. The landscape has this strange magical effect.”