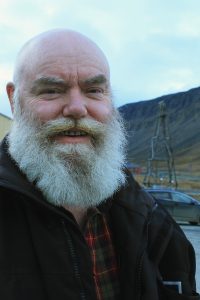 Pyramiden became famous because of polar bears breaking in. Read on to see what happened next.

There were no guests at the hotel at the time it happened (2014) but the staff were present. The polar bear broke in and went straight into the bar. One of the inhabitants of Pyramiden, Sascha, lived on the second floor. Sacha went down and chased the bear out of the building. In the middle of the night, he reported the event to the police force in Longyearbyen who is responsible for chasing bears away from settlements. One hour later a helicopter came from Longyearbyen with well-armed but very grumpy police officers people, and as soon as it arrived the bear went off and was never seen again. The incident of a polar bear breaking into a hotel made Pyramiden famous, as it was reported on Norwegian radio and even in an Australian newspaper!

Despite the polar bears threat to “Soviet tourism”, “Polar-tourism” is on the rise with tourists filling the hotel rooms and harbours in Spitsbergen. Polar bears, snow foxes, glaciers, ice caves, trips on snow scooters or dog sleds and the chance to get a glimpse of the northern lights attract many visitors annually. The number of flights to the mainland has increased from twice a week to three times daily. Spitsbergen used to be shut off from the mainland for a large part of the year but with global warming, the Arctic waters are opening. This creates a higher influx of tourists who want to see the sea ice and glaciers before it is too late. As cruise ships increasingly find their way north, the local dynamics are changing.

Many people take advantage of the new opportunities tourism offers. Wiggo Antonsen tours back and forth to the airport in search for new “punters”, to offer a local tour of Spitsbergen and its inhabitants, tell dark stories about the mines, the polar night, heavy drinking, fights, and death. There are others who are exploring sustainable tourism, such as Ben Vidmar, with the “taste of Svalbard” tour.