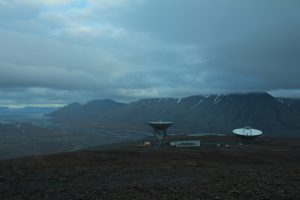 Tourism and research are the future, not mining. Continue reading about the transformation of Ny-Ålesund.

Mining operations in Ny-Ålesund (not shown in picture) were shut down after an accident in November 1962 killed 21 miners in a blast. More than 68 miners have been killed in mining activities since Kings Bay Coal Mining company started in 1933. Since the mining operations ceased it became a research town. Miners took the dead bodies from the mine after the accident. At one point, the graves of the dead miners were replaced 30 meters because of permafrost.

Then strange things started to happen. Nobody talks about it, but everybody agrees that one of the houses in Ny-Ålesund is “very uncomfortable to be in.” It is said to be the ghost of a woman, originally from Finland who was kept as an undernourished ‘slave’ by two trappers in their hut. The ghost was released after the fatal accident with the miners.