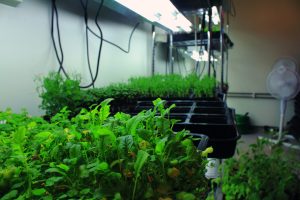 Read on to learn about carbon footprints and what locally grown food has to do with it.

The history of Spitsbergen is based on extraction. First whales, then animals, coal and now you could also add Arctic tourism. Although there used to be farming and agriculture in Spitsbergen during the coalmining period in Norwegian and Soviet settlements, the resources of the archipelago now are barely used. Reindeer are hunted but at such a low number that it isn’t enough to support the community. The meat caught by the few trappers left is sold to restaurants. Although hobby fishing is allowed, local restaurants can’t make use of it of fish caught, as it is sent and packaged on the mainland before being sold back to Spitsbergen. The Russian community used to have greenhouses and pigs but this is no longer the case as no money was being made.

The concept of who is local is very relative in this highly transient community. Most people aren’t in Spitsbergen all year round and regularly fly to and from the mainland. This contributes to the fact that inhabitants of Spitsbergen have one of the highest carbon footprints in the world, which is ironic, as Spitsbergen itself has very strict environmental laws.

But environmentally friendly initiatives are not commonplace in Spitsbergen. Ben, the founder of polar permaculture, was frustrated with the lack of environmental practices in Spitsbergen and wanted to change it. Although permaculture is not new, applying permaculture principles to the polar regions is. The beauty of his project is that Ben is proving that sustainability is possible, and defying each obstacle, gives no excuse for the rest of the world to continue with unsustainable practices.

There weren’t any environmental projects in Spitsbergen before Polar Permaculture. Supermarkets sold the cheapest products available without offering ecological or organic options. An unintended but welcome side effect of Polar Permaculture was the start of a dialogue concerning self-sufficiency in Spitsbergen. The supermarket has had organic options since they heard about the greenhouse and the mission to grow local food. As organic food and fruits were added to other options, everybody wanted more. Ben: “people want to do the right thing! They just didn’t understand at first what I was doing. Now they do and they all want to help.”