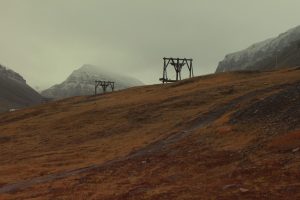 Exploitation plays a central role in the history of Spitsbergen. After the whaling-exploitation was over, coal mining gave rise to the different settlements in the archipelago. Recently the Norwegian government closed down the last operating mines – Sveagruva and Lunchefjell – due to economic downfall and falling oil prices. In any case, due to a difficult climate for mining and fluctuating price of coal, it is thought that mine extraction actually never rendered much profit to the ‘Store Norske Spitsbergen Kullkompani’ (SNSK) in the 100 years the mines were open.

After operating for over 100 years, out of all of the mines, ‘Gruve 7’ (mine N˚7), which operates on a very small scale, is the only Norwegian owned mine left. Arktikugol, a Russian enterprise, continues going on strong, having been extracting coal from the mine in Barentszburg since the 1930’s. Countries that are part of the Svalbard treaty can reopen the mines after obtaining the licenses left by the SNSK.

Most of the miners who originally came to Longyearbyen worked and lived at Sveagruva, as Mine 7 was nearby. There are not that many left. That has changed because 20 years ago, miners used to be everywhere. Miners would come at what now is the local coffee bar Fruene by bus from Sveagruva, and would change their clothes before going home. Other inhabitants used to work in the mine to pay for their studies. The priest had a really tough job reaching out to the the miners who were often heavy drinkers. According to Statistic Norway, Spitsbergen has a higher alcohol consumption per person than in any other region in Norway. Heavy drinking goes hand in hand with the dark winters, keeping bodies warm and spirits high, with social activities being a good excuse for drinking. Miners also used to drink against anxiety and pain. Serious injuries were commonplace in the mines and working days long. Changing circumstances made miners a minority in town, even at their hangout spo, the Karlsberger Pub, the local whiskey bar.

With the reduction of mining activities, space is made for other industry such as tourism, research, and higher education which brings with it changes in population demographics. Where as there no longer many coal miners left, the University Centre in Svalbard (UNIS) has bought in a big influx of new student inhabitants to Longyearbyen.