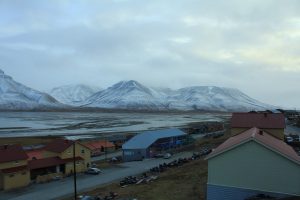 Having employment is a prerequisite to live on Spitsbergen. Read on to learn about this mechanism and geopolitical dynamics.

Although Norwegian law rules on Spitsbergen, Spitsbergen is open to residents from all countries as long as they have the economic means to support themselves. In other words; if you have a job, you are entitled to live there. This is geopolitical dynamics at its best: one could say that highest number of inhabitants with a particular nationality, to a certain extent, “rule” the island. Nevertheless, residents have to meet certain conditions, and the local state representative (Governor of Svalbard) is allowed to dismiss people from the archipelago without sufficient means to support themselves. Furthermore, residents have to obey strict environmental laws, which can be summarized as: “leave nothing behind but footsteps”.

Norway advocates inhabitants from the mainland to go to Spitsbergen to work for state-owned bodies: the state mines, church, school, hospital, Sysselmannen (state representative), municipality and university. They are allowed to stay for a maximum of four years and will be appointed accomodation and a car. As such, people make the most of their stay: they are nature lovers and so enjoy the limited time they have. Work is well paid with good labor conditions (although it is no longer possible to buy a snow scooter from a one-month salary, which used to be the case). This gives shape to a certain mindset: residents of Longyearbyen are often happy, as they have chosen to be there. Because of the four-year maximum stay rule, there are very few people who actually grew up in Spitsbergen. We were lucky to have met two of them.

With such dynamic residential policy, it is interesting to consider what it is that makes one “a local”. You have to earn the title “local”. You have to stay for at least a year, and even then you’re still considered one of the “new ones”. Depending on confidence and time, for most, roughly 6 years are needed before you are really considered a local, at least to some extent.