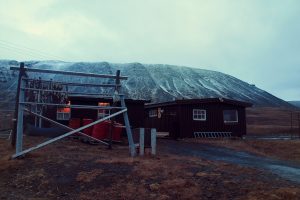 Who is a local in a land where officially no children are born? Read about the community and what happens to pregnant women in the fragment below.

Spitsbergen is a community of immigrants, even for those who are about to set foot in to this world. Pregnant women have to leave the town two weeks ahead of delivery as the hospital in Longyearbyen doesn’t have the infrastructure to support the mother and child in case of emergency. Children officially aren’t born on Spitsbergen. What happens if women go into labour earlier then expected? In this case, an ambulance flight will bring the mother to the north of Norway, hand her over to a road ambulance to take her to the nearest hospital in Tromsø for the delivery. In the words of one of the mothers: “four blond angels waited for me and took me to the hospital bed”. There are many children at Spitsbergen and quite a lot of them went into labour too soon. There were one child and one pair of twins who were actually born in the archipelago because they were too fast. The no-child-is-born policy doesn’t have anything to do with the passport of the newly born however.

The community has seen many changes over the past ten years. Whereas previously everyone was acquainted in one way or another, with the growth of the towns it has become increasingly difficult to recognize a familiar face. This doesn’t mean there isn’t a community. There is gossip and cameraderie between groups, although this depends on who you are speaking to. “Big city”- outfits, such as a skirt and high heels, are often discussed as inappropriate. People also find each other online. There is a Facebook page where people criticise eachothers behaviour, working as a kind of social control measure. Nobody wants to be the person who forgot to unlock their rifle and walked into one of the settlements. That would be a huge mistake. The trick is to check with both eye and finger to make sure there are no bullets left in the pipe of the gun.