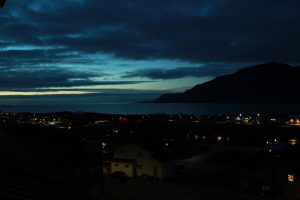 It is time to relax and get together with others during the dark season! Read on for insight into what goes on when the sun doesn’t shine.

During the dark season people are not held to any particular routine as there is no distiction between night and day. In general many social activities are held and people party more than in the summer months. In the middle of the polar night “The Polar Jazz Festival” is held, drawing in an international crowd.

Marc Sabbatini first time on Spitsbergen was during a visit to The Polar Jazz Festival and instantly fell in love with the place. During the first polar jazz festival, Marc met a bass player who explained how he brought his bass outside in -25˚C and it literally exploded! Life is life, but in Spitsbergen, things happen that don’t happen anywhere else. A few months after his first visit Marc came to start a new life in Spitsbergen, leaving his life as a journalist in Los Angeles and started a new newspaper “Ice people” – the worlds northernmost alternative newspaper.

The “Sun Festival Week” marks the end of the dark season and the beginning of living in the light in Longyearbyen. It is said that “the sun is declared back in Longyearbyen when its rays reach the steps of the hospital”. The church participates in the festival with an outdoor service, and there are exhibitions, music, and lectures. Although the peak temperature in summer is just 7˚C, people place metal plates in front of the windows to block out the light and avoid heating the building.

During summer Spitsbergen becomes crowded with tourists, many of them day-visitors from cruise ships. The MSC “Preziosa” is a cruise vessel of a company that is increasingly investing in Arctic tourism. The cruise ship can host more than 3,500 people, outnumbering the 2,700 inhabitants of Longyearbyen. In one week in June 2017 more than 20 cruise ships embarked on Longyearbyen. Even larger cruise ships than the “Preziosa” and more frequents visits are expected. Although tourism is necessary for economic growth, it does affect the lives of the people who live there. As a precaution, tourist shops limit the amount of consumer goods, such as alcohol and chocolate, tourists can buy, to ensure there is a sufficient amount left for the locals.