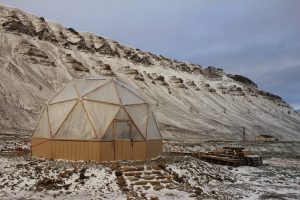 Continue reading to learn about urban farming in the high Arctic.

Having worked as a cook all over the world, Ben knows that restaurants and hotels try to make the best use of food to minimize food waste. That wasn’t the case in Spitsbergen. At the end of the day, all organic waste was dumped into the sea. Meanwhile, the largest supermarket in Longyearbyen, the Svalbardbutikken, kept raising the price of products and there was a lack of fresh products.

Ben thought a different way of dealing with food was possible and started to grow his own seeds, vegetables and tomatoes in his house. He began to use his produce at the Svalbard hotel where he used to work as the head chef. The manager agreed to buy the food and so Ben invested in more equipment, and Ben’s project started to grow. However, the shipping of materials for Ben’s project was a problem, as it doubled the price of nearly everything needed for the project; fertilizers, watering installations, soils… So Ben plunged into permaculture practices to study how to grow food in the Arctic himself and came back from permaculture conferences with a mission: to produce fresh products for Longyearbyen and process all the community’s organic and biological waste. Ben strives to make the town sustainable, tapping into the forgotten tradition of Spitsbergen’s self-sufficiency and sustainability practices.

Polar Permaculture was born in 2015, starting with worms to create usable soil to grow food. Ben and his team work with the rhythm of the north, which mean growing onions and tomatoes in summer (when there are 24 hours of sunlight) and small greens in the dark winter. At the beginning it was hard for people to understand what Ben was doing. They thought he was some kind of garbage man, collecting their waste for free, wasting his time and not making any money, but now they understand and want to help.

Ben: “in a way, I am all alone, in a way I am not. People are all coming and contacting. I just let it flow. Half of the time I don’t even know what I am doing but then something will happen and I will figure it out or somebody will contact me. We were building a greenhouse and I had no idea how to do it. And the next time a friend of mine came and said he could build. And I was thinking about how to take it to the next level and the circular economy consultant sent me a message. I called him straight away. I had been waiting for him! I just really want to grow food here.”

Today, the products of Polar Permaculture are available for sale at the local grocery stores and used in Spitsbergen restaurants. Regardless of whether Ben will reach his goal of making the northernmost town self-sufficient, his perseverance and enthusiasm is an inspiration for making the impossible possible.