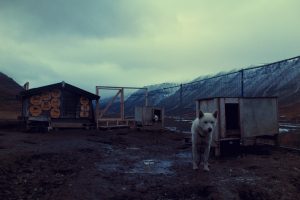 Dog sledding is fun, but becoming quite tricky. When it is icy it is not possible to go out with the dogs, although some people do train their dogs with sleds on the ice. Continue reading for further details on dogsledding and avalanches.

Now that the fjords are not frozen anymore it is difficult to travel in winter as you have to travel over land and on glaciers instead of on fjords. It is possible to sled with various numbers of dogs. “I have 3 dogs only but I have a friend who has 8 so together we have 11. We make 2 sleds of 5 and 6. The dogs are so happy to work. It is so nice to see. Sometimes I get really touched when I see them that eager.”

Dogs can help protect against polar bears as they bark when they sense danger, but they are of no use in case of another threat: avalanches. A big avalanche in December 2015 killed two people and destroyed 11 homes. Fortunately, most of the homes were unoccupied as people were away for the Christmas holidays, but the avalanche caused significant damage to the town. To avoid such incidents in the future, the governor of Svalbard will declare safe and unsafe areas in Longyearbyen. Inhabitants are also forced to abandon their apartments for other reasons. Over the past decade climate change has softened the permafrost under the old hospital building (now converted into apartments), causing it to buckle it in a severe way. Once the governor of Svalbard had the building inspected cracks and weaknesses were found everywhere. They summoned the inhabitants to leave in 2 hours’ time, rendering 30 people homeless in an instant.