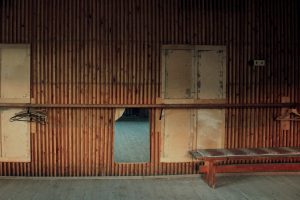 Housing settlements, infrastructure and the mine had to be rebuilt after WWII. Read about post-war developments below.

Eventually the mine opened in 1956. The tracks to the mine entrance are several hundred meters up the slope of Pyramiden mountain. One of the tracks brought mine workers up the mountain, and the other one brought coal down. The mine was open 24/7 and all year round and inside it was dark, with stable (but cold) temperatures. Coalmining usually necessitates going a couple of hundred meters down to dig out coal, but here, due to the geology of the mountain and of land rising, the entry of the mineshaft is a couple of hundred meters above sea level, high on the slope of the mountain. There are air ventilation shafts and emergency exits all over the slope on Pyramiden mountain.

The community in Pyramiden flourished because of the mining activities in the 70’s and 80’s. Roughly 1200 people lived there, including families. The wide main street which crosses Pyramiden was officially called “the street in remembering the great October revolution”, but is now more commonly known as “the Champs-Élysées”.

A statue of Lenin marks the end of the street, behind which, there is the “culture house”. In the culture house, there was a football field, handball, ballet classes, cinema and concert hall. People could go there after work, to read Soviet literature, take ballet classes and see movies in the concert hall. Next to it was a swimming pool and behind it an indoor shooting range. A big red building close to the culture house has the remains of an orthodox cross. There were plans to build a chapel there, but since a major airplane accident in Bartentszburg in 1996, the construction of the church in Bartentszburg was prioritized. The hospital in Pyramiden was very well equipped and, in line with Russian tradition, staffed with female doctors.

Coal mining in Spitsbergen has never been very lucrative. It only ‘survived’ because of governmental strategy. For the Russians, presence on Spitsbergen meant a Soviet communist town in the West, which could be visited by anyone. The Norwegians saw it as part of a propaganda exercise, and Pyramiden formed the perfect utopian town. Most people who grew up in Pyramiden are very proud of their town. Even though it was was planned with mining and productivity in mind, worker’s welfare, social cohesion, and family life were all carefully considered too. While Longyearbyen was largely male dominated (due to the mine workers), family was at the heart of the community in Russian mining towns. It was designed for people to stay there. There even was a farm.

The end of the Soviet Union affected life in Pyramiden too. Capitalist coalmining didn’t work out as it should have done. In the 1990’s there was no money to pay the mine workers or to sustain the school. Children and families were sent back to Russia and the miners stayed. On the 31st March 1998 the last wagon of coal was taken out of the Pyramiden mine and by the end of that summer the last people had been evacuated. At this time, there weren’t 1200 inhabitants, but around just 800. Nine years later no one was left at all. The Russian coal company, Trust Artikugol, sent two people back to Spitsbergen in 2007 to keep watch over the area. Their job is to look after the place, make sure nothing gets stolen and to do basic maintenance work. Since then more people have come to work there, with a maximum eight people working there in the summertime. During the dark season two people remain in the Tulpan Hotel which has ‘Soviet-style’ preserved rooms.