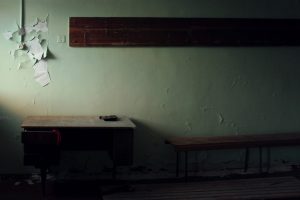 What was it like to live in the “utopian” town of Pyramiden? Read about the men, women and children of the popular previous Russian mining town.

The soil of Ukraine is the soil of Pyramiden. Tons of soil was shipped up from Ukraine and spread out to form the base on which Pyramiden was built. The grass was imported as well. During the summer only children and cows were allowed on the grass, with adults requested to stick to the streets and within designated areas. In the summer the surroundings are still green.

Pyramiden was a self-sustaining town. In the golden age (the 70’s and 80’s) there was a farm with cows, chickens and pigs; providing inhabitants with milk, meat, and vegetables from greenhouses. The story goes the Russian community in Pyramiden exported eggs to Longyearbyen in winter when the docks of Spitsbergen were closed to ships and thus supplies of the mainland. Longyearbyen had never had the same scale of self-sufficiency as Pyramiden and depended on supplies from the mainland.

Men, women and families met each other in the “cantina”, where food was served almost around the clock. Mineworkers (which included women) worked in shifts so everyone would eat dinner at different times. Even though they would see each other in the canteen, housing separated different groups of people, with single men, ladies, and families living apart. There were rumors that a secret tunnel would go from “Paris”, the name of the building where the single women lived, to “London”, the building of the single men. On the outside of the building were metal boxes that looked like air conditioning, but actually functioned as fridges in the summer, and freezers in the winter. In each apartment, there was a small kitchen to make tea and small meals. Families lived in what was called the “Crazy House”. In summertime there were a lot of noises because of the squeaking of birds, who build their nests on top of the refrigerators year after year, creating a strong smell. In the dark winter season children couldn’t go outside so played in the corridors, running around and making crazy noises.

All the buildings in Spitsbergen were constructed on poles (made of brick in Pyramiden and wood in Longyearbyen) that go above the ground because of the permafrost. As in Longyearbyen, Pyramiden had a central heating system which was provided by the power station. In Pyramided the covers of the pipes were transformed into boardwalks which lead all the way to the harbor. Thanks to the escaping heat the boardwalks would be free of ice and snow and formed a quite popular place for lovers to take a stroll.

Pyramiden was a very popular place to live, not only because of the boardwalks. It was beautiful and well-planned and a great place to live. With incredible good food supplies, self-sustained with dairy products, meat, good housing possibilities meant for happy and hardworking miners. During one year, more than 10.000 CV’s were sent to the mining company in Pyramiden.