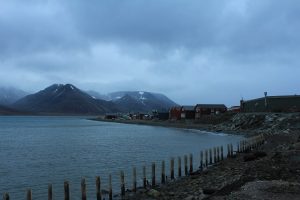 Until the beginning of the ‘00’s the fjord west of Longyearbyen used to freeze in winter. In 1928, they had to use dynamite to get a boat into the green harbor but today the fjord no longer freezes. The fjords used to act as a shortcut for inhabitants of Longyearbyen to reach cabins in nature as they could cross the frozen fjord with snow scooter or dog sleds in a couple of hours. Read about the developments of the fjord since it doesn’t freeze anymore.

Unfortunately, in Longyearbyen and Ny-Ålesund, the fjord has seen long periods without ice. There were years prior to 2005 when the fjord didn’t freeze or froze very late but it hasn’t frozen at all since 2005. Warmer temperature causes the permafrost to retract, which makes the coastline more susceptible to erosion. In recent years it has been raining a lot in winter as well. As rain falls on the frozen tundra it freezes and the tundra becomes covered by ice instead of snow. This affects the reindeer, who get their food from digging in the snow, and can’t reach the food when the tundra is covered with ice. Polar foxes feast on the dead reindeer and, as there is plenty of food, reproduce many small polar fox puppies, increasing the number of natural predators for geese species in Spitsbergen. As this goes to show, changes in the climate have already had many effects in the high Arctic.

Specific types of traditional sailing vessels are allowed to travel to the most remote areas within the Arctic waters. De ‘Noorderlicht’ is one of them. For the last three years, the Noorderlicht has not encountered ice in the Arctic waters at the end of the season. Other inhabitants of Spitsbergen feel the consequences too. Polar bears are increasingly seen on shore in search of food, broadening their diet with bird eggs and dolphins, sometimes coming dangerously close to town. Inhabitants leave the front door open to serve as a refuge for passersby in case a polar bear emerges in town.