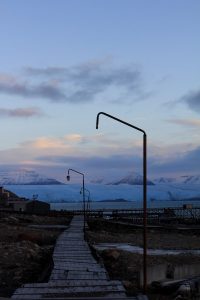 Trappers are the oldest inhabitants of Spitsbergen. Read further to learn about their hunting practices and living conditions.

Because of WWII Spitsbergen had to be evacuated. The trappers had to shoot their dogs as they could not take them with them and left their huts behind for five years. When they eventually came back to their cabins they found them severely damaged, having been exposed to harsh weather conditions for such a long time. Some of the trappers came back to live in Spitsbergen, although not many of them stayed longer than one year.

The current governor of Spitsbergen limits the number of trappers on the archipelago. There are just three trappers allowed to live in their cabins all year round, as they want to limit how many animals (like foxes or reindeer) are hunted. For active hunters, it is actually quite a lucrative income, although prices for local products provided by the trappers changed after the war. Trappers sell birds, fish and reindeer meat to the city.

One of the trappers has been there for 40 years, though he is not working much anymore. The other trappers are really active and energetic young guys. In the library in Longyearbyen there are books about them with pictures taken from their daily lives where you can see how they make smoked sausages and collect the eggs. It is possible to visit trappers but one has to be careful, as trappers are very busy, and with people in the cabin drinking coffee and chatting they tend to feel intruded upon. Some of them prefer a more solitary existence.

Trips to the trapper cabins are tough. Some employees from the Norwegian polar institute took a trip to far in the North to visit a trapper to see him in action. Together they noticed yellowish spots in the distance, which, as they came closer, turned out to be polar bears. At one point they disappeared, but reemerged just 12 meters away. The trapper marched out of his cabin with his rifle and walked towards the polar bears until they turned around and left.