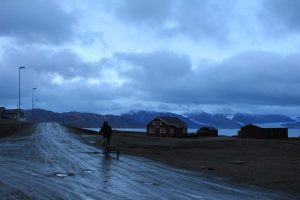 Just outside the edges of Ny-Ålesund there is a statue of Roald Amundson, the famous Norwegian explorer who, along with 15 other men, crossed the geographic North Pole by air in May 1926. In the fall of the previous year, ambitious engineers and 50 tons of wood, iron and other materials were sent to Ny-Ålesund to build a hangar. Built in the dark winter, the hangar became 100m long, 30m wide and 30m high. In the spring of 1926, a Zeppelin flew up from Italy to England and via Saint Petersburg to Ny-Ålesund. When the zeppelin arrived, people climbed down from the zeppelin and it with 4800 bottles of hydrogen, each weighing 160 kilos. Italian aeronautical engineer Umberto Nobile, Roald Amundsen, the crew and a small dog flew off, travelling over the North pole and landing two days later in Alaska. They were the first people ever to see the North pole. As the Norwegians financed the flight, the Zeppelin was called ‘Norge’, even though the Zeppelin was designed and led by Nobile.

In 1928 Nobile wanted to attempt to fly to the North pole solo, and he completed two successful trips. On a third trip, he flew in to a storm and the zeppelin crashed. The search party consisted of several hundred of people, including some of Nobile’s crew who died looking for him. The zeppelin flew off and was lost forever, but Nobile survived, after being picked up by a Russian boat. Amundsen was less lucky. He died when his plane crashed. Nobody knows exactly where, because his plane was never found. At that time, the Norwegians were really angry at Nobile for risking and ending the life of their big polar hero. Today the hangar of the zeppelin has disappeared, having been dismantled piece by piece by tourists taking parts as souvenirs. A section was also used as material to construct the hanger to build up houses in town, as building material in the high Arctic is scarce.

Out of the 1000 people who tried to reach the North Pole in the late 1800’s, 751 of them died during the attempt. Among them was August Solomon Andree who, together with his companions Nils Strindberg and Knut Frænkel, departed in July 1987 to cross the geographic North Pole in a hydrogen balloon. Trouble with fog and hot air escaping through the seams in the Parisian-made balloon caused the men difficulty with the steering. The men discarded baggage to lighten the load and change their course. After sailing for 65 hours and covering 475 km, the balloon hit ice. The three men walked for two months against the direction of the moving pack-ice and managed to reach “White Island” (Kvitøya), but all died a couple of weeks later.

The bones of the men were discovered 30 years later, together with their diaries and travel log. The Norwegian government organized a big state funeral for the men. Nils Strindberg’s diary describes the events in the form of messages to his fiancée Ana Charlier. After she died, her heart was removed, burnt to ashes, put in a silver box, and placed next to the remains of the remains of her engaged man.