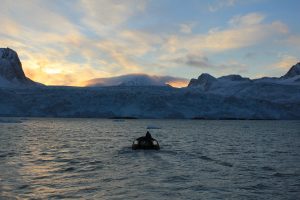 The captain of the Antigua discusses unchartered areas and glacial retreat.

Transcription from interview with captain Joachim [16-10-2016], unedited:
“We are sailing here on charts which still have white spots [blank areas] on them. That makes it really interesting. I was used to having a chart which has every single rock on it. So one could sail and totally trust the chart. Until I came up here and realizing that you always have to count on the fact that there is always something missing. This gives a totally different feel to the way you navigate, how to sail and where to go. The uncharted areas are basically in front of every glacier, because every glacier retreated. The glacier lines on the chart there just miles and miles forward to where nowadays the glaciers really are. Even though in Arctic life eight years is noting, it is possible to see how fast glaciers retreat. The island we were standing on in Fuglefjorden for example didn’t exist until 2009 as it was covered by the glacier. It must have been 2010 or 2011 when we first saw a piece of rock appear underneath the glacier. And then at a certain point an island came out in the last years. Now the glacier is so far away.

It is normal that glaciers retreat, but the speed in which they are retreating is quite increasing. As well as the melting of the sea ice. Nowadays the tourist season starts in May, while ten years ago in May you didn’t have much places to go! There were no ships because you didn’t have places to go because everything was still in the ice. All fjords were closed. The first years I was always worrying if we could actually manage it. In the first years I couldn’t go to some places even in the last half of August, because there was too much ice. Nowadays I come here not even worrying if the trips can go on.”