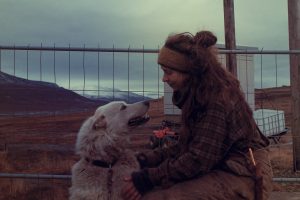 The work of guides changes with the seasons; guided trips on boats in the summer, dog sledding in winter. Read the about a guide’s experiences of the changes in weather in different seasons.

Transcription from interview with Kristin [14-10-2016], unedited:
“A couple of years we started sailing the 15th of May. And we were really surprised, we never started that early! It was a new record. And last year we started in March. The year before I was in the exact same spot with the dog sled on the ice and then I was there, one year later but two months earlier, on the boat in open water. Absolutely no ice. That was completely crazy. Because boats have been summer feeling for me, because that is what you work with in summer. So being on the boat in March… It completely messed up my head in a way.

The official return of the sun in Longyearbyen is the 8th of March. And then the midnight sun starts end of April. So it is only a couple of weeks with day and night before the midsummer night starts. It starts to get warmer in May, then you feel the sun on your face. That was also quite early, last year. The extent of sea ice depends when boats can return to the water. So, normally, all the bigger boats here on Spitsbergen had a home port somewhere else. They come in summer and then they leave, to go to Tromsø and other places, and they would come back in summer. All of the east fjord used to be frozen in winter. One could take out the snowmobile or dogs and drive straight across the fjord. But the last time it has been completely frozen was in 2004. People tell me they used to get the dogs and cross it in three hours and I am like “what?” it is a ten day dog sled now, going around all the fjords! It is a completely different world. Distances get different, time and travel distances.

In every cabin you have the ‘hytebook’, which is a hutbook. Visitors write down where they have come from and where they are heading to, weather conditions and the state of things in the hut. It is also a bit like ‘gossip central’ because you can see which people were there, and people will tell about the animals and plants they have seen, so it is a really nice thing to read. And often you have old magazines with something you have never read before, and you read something else then the pocket book you often have with you on the sled. The cabin book is the best one, you see all the different stories. And sometimes you know who they are. Reading hutbooks is one way to compare how the landscape used to be, to what it is nowadays, and the descriptions are really different.”