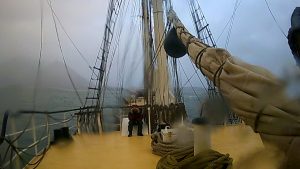 Interested in reading about the (short and heroic) lives of whalers and the whale hunt? Read on…

Becoming a whaler used to be considered heroic, and considered a good job in comparison with staying at home, even though some whalers used to perish on their expeditions. The graves of the people that were found on Smeerenburg are men between 25 – 30 years old, never women. Young, strong men. The most likely way to die would be when the hunters were in pursuit of the whale. Just before it surrendered it would it would make a last effort to survive, using its tail to hit the boat, a powerful blow that would sometimes kill the hunters. Men also died of scurvy, general working conditions and the long journey from the Netherlands to Spitsbergen. All of the whaler graves were being slowly taken by the sea due to erosion so were moved, which a rare thing in Spitsbergen, where usually everything is protected and nobody is allowed to move anything. The whaler graves were moved to a small island (“corpse island”) and made into a monument for the whalers. There isn’t a lot of vegetation on the island and every spare part is used for the grave. The whole island is covered in bones.

There were seven stations and 200 men living on Smeerenburg in summer. It was where they used kettles (made of cement made of stones, sand and whale blubber)to boil whale blubber into oil. The whalers would take the whale on to the land and slice a checkered pattern on the whale. They would remove slices the size of a bible, and alot was of flesh would be left laying around, rotting away. The whalers were living in the same clothes day after day, and they must have been drenched in their oil and fat. It must have been an extreme smell.

All of the oil and blubber soak into the ground. The historical trace of which you can see today, hundreds of years later, as the ground and vegetation is very yellow. Furthermore, the bottom of the sea is now full of whale bones, as after the blubber was boiled, any unused meat and bones would be thrown in to the water. It was only much later that they boiled the bones to get the more oil, which happened in Antarctica. On Smeerenburg unused parts of the whale would simply rot.

The blubber was initially used mostly for soap and parafin for light. Later on it was also used for corsets and umbrellas. The discovery of natural gas coincided with the time when whales had almost become extinct, marking the end of the whaling period.