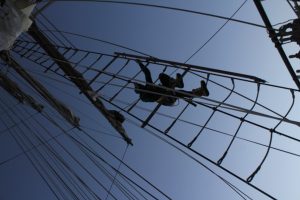 Whales and even walruses were hunted in vast amounts on Spitsbergen. Read on to find out about the beginning of the Dutch whaling period.

Smeerenburg island is in the northwest of Spitsbergen, between 78 – 80 degrees north. Smeerenberg is one of the most documented places in (Dutch) history of Spitsbergen and is frequently depicted in paintings. It is a place where the sea doesn’t freeze in winter because of the warm Gulf Stream. Smeerenburg was at the center of the Dutch whaling industry in the early 17th century. Behind Smeerenburg there are large mountains which act as a guard between the whalers and the open ocean. On top of the mountain you could see straight towards the North Pole and whalers would climb up to spot whales. If they caught them they could easily drag them on shore of Smeerenburg island, cut them off and boil them, and then, ship them back the end of the season.

Whalers would slaughter walruses. They are quite easy to slaughter. You just kill the first row and the others would panic which would cause confusion and they would turn on eachother, essentially killing themselves. In this way, they were almost hunted down to extinction. At the moment when I visited Smeerenburg they had started coming back and even a mother and calf was spotted, which is quite a special event.

When the whalers went to Spitsbergen there were stories circulating about the number of the whales in the water being so vast that it was difficult to navigate. These were Bowhead whales, or the Greenland “right whale”, named in this way because it was the “right whale to kill”, being very fat, slow and so easy prey and with so much blubber that it would float when it was killed. They have a lifespan of around 200 years, so for them, the hunting took place just two or three generations ago, which is perhaps the reason why they don’t come to Spitsbergen anymore.