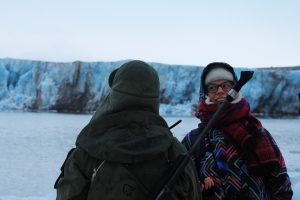 Transcription from interview with Kristin [14-10-2016], unedited:
“There are roughly two million seal in the Arctic, with a big population of bear seal and ring seal. As the figure is so little compared to the population it is okay to hunt seal whereas in Norway there are quotas in seal hunting. There is no commercial seal hunting here. Only trappers or private hunters go out to shoot seal. There aren’t ships going into the ice to hunt groups of seal, because all seals are solitary. The flesh is very dark, completely black, and very lean. It is very good actually. It has quite special structure and very gamy, but very good meat. And you can make it in different things; smoke it, dry it, make it in different sauce, use it as a steak.

In winter you dress up all in white with a white balaclava, and white cotton pants and jacket to blend in with the ice. With a mini sled to put your belly on top you will hide behind a piece of white cloth. And then, slowly slowly, you slide over the ice. And every time the seal looks up you stop. Because the seal can see you very clearly when moving. But if you are still it thinks “something is over there but it is far away, and nothing to worry about” because of the camouflage. So every time it looks away you move a little bit closer and you slide until you are close enough. And there is a little hole in the cloth and you put the rifle through, and you shoot. That’s the most fun. It can last for hours and hours with cold wind and low temperatures. And then it could be the seal is scared away when making one wrong movement, after hours and hours of slowly approaching. That’s how hunting is. You don’t always get something. But you need to go out trying. And sometimes you get something. And then it matters a lot.”