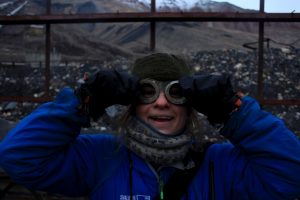 Read about a guide’s experience with changes in weather, retreating glaciers and what to tell tourists.

Transcription from interview with Marte [14-10-2016], unedited:
“I didn’t know anything about the situation based upon my own experience, I just knew it was getting warmer, the temperatures higher, and I could read from old trappers books that there used to be ice in fjords that have been uncovered in the two consecutive winters that I have been here. The most visible sign of the climate change is the return of the glaciers, which is clear with all of the glaciers we have been visiting we could really see how far the glacier stretches out on the mareen, and the same is apparent on all landings we have been. The island where we were yesterday was 880 m inside the glacier front according to the map, which was quite recently updated, so change is happening really fast. There is no doubt at all it is geting warmer. I have had a lot of thoughts about guide education, and have been reflecting upon my role in all this. Because simply living here is not environmentally friendly. Every piece of garbage you throw is going down with the boat, making everything much more polluting. There shouldn’t be people up here. but I have figured out it is good that some of us try to be good representatives of the Arctic and put some tracks in peoples mind on climate change.

So I decided I can be a guide on Spitsbergen just if I try to make people aware of climate change. So at home they start to bike instead of drive to work for example. I normally show people with the glaciers how far they have gone. Those who don’t believe in climate change really see it and you cannot have any arguments against what you see. Then I tell them about polar bears and how they should be growing. There should be 10.000 of them. They got hunted down to 1000 of them in 1973. And they are 3000 now, aproximately. And probably the reason is the environment pollutions. The heavy metals, gases, even radioactivity, all of those human created shitty things are affecting the animals so much. Animals are full of environmental poisons and it affects their living. This year, one of the other guides, has found many of dead seagulls close to the valley where she lives. And I don’t think they have done any research on them. I have read the report from the governor on PVC, they have found so much high levels in the endangered animals, for example the polar bear. It affects their immune system and fertility. And I tell people that. And some people say you have to be careful what you say about climate change, but it is the truth, so I think you have to say it. I want to tell about the challenges and tell about the stories. I love stories about the people spending their life here, the old trappers.”