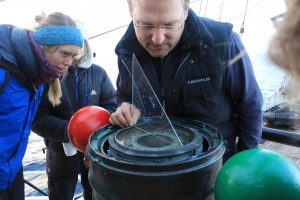 Hunting in Spitsbergen takes place according to regulations and a lottery. Read about hunting deer and previously hunted polar bears

Transcription from interview with Kristin [14-10-2016], unedited:
“With some animals, like reindeer, it is possible for someone with a hunter license and having done a shooting test to apply to legally hunt one a year. Applying entails entering a lottery where you get assigned an area where to hunt a specific deer, once a year. The reindeers don’t have any enemies and they are not used to being hunted and therefore are an easy target.

Seals can be hunted only during the hunting season. One still needs to have the hunting license and rifle test, but there in no quota because seals are used to being hunted. They are not easy targets so are not easily shot. Seals can be hunted from the middle of March, depending on which type of seal, even though it is not allowed to hunt them from middle of March – end of May. Endangered species are not. Hunting in the dark isn’t permitted because hunters need enough light to be sure to shoot accurately and make a humane kill,.

There is a funny story about a trapper hunting polar bears, when that practice was still allowed. The trapper was out on the ice hunting bear, accompanied by his wife who saw the whole incident from the window. He saw the polar bear and he thought it would be a great idea to dress up as a seal. So he put sealskin on to go on the ice so he could go very close to the polar bear and shoot it. And he was getting closer and closer and his wife was back in his cabin watching this from a distance. When he was very close, the bear suddenly turned around. The trapper thought “this is my chance”. But the bear acted very strange because it threw itself around and started running. And then the trapper turns around where he sees a much bigger bear, hunting him, the trapper dressed in a sealskin. Luckily the trapper was just in time to turn around and shoot the big polar bear. So don’t dress up as a seal when hunting polar bear.”