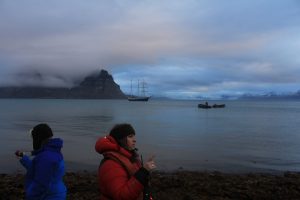 Kristin has been living in Spitsbergen for six years, dogsledding and visiting trappers huts. Read about her story below.

Transcription from interview with Kristin [14-10-2016], unedited:
“Last Christmas we had a really big storm and avalanche and after we had a rainstorm. And then we got slush avalanches in the middle of new year’s eve, which was pretty intense. A whole valley was opening up with rivers flowing at the end of December. That was really weird because it was the middle of winter. It was raining there were slush avalanches taking away the road and really making it impossible to go anywhere. But I cannot say I have seen changes in climate. Because in 6 years you see changes in weather, not in climate.

Compared to what I see traveling around and what I read, it is completely different. If I am in an area and I read a diary of a trapper from the 1920’s my experience of the area is completely different. He will talk about crossing a certain fjord, and even in the early 2000’s they talk about crossing this fjord between Spitsbergen and Edgeøya, and you can’t do that now. There is no ice there. And the little ice there is, you wouldn’t cross it. The fjord is an enormous amount of open water. Last winter I was on the east coast when we were going to hunt and there was a little bit of ice in the bay with open water straight across the fjord. But what you read about it in the books in trappers cabins is people go there sledding, tent in the middle and continue sledding. And I can’t imagine that! From what I read in earlier times and experience it is a completely different world, even to the beginning of 2000s or earlier histories.”