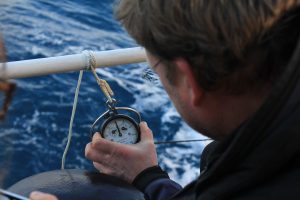 Continue reading if you want to learn more about map-making in Spitsbergen and what it has to do with climate change.

On board of the Antigua there are charts, just like on all sailing ships. Interestingly, there are charts with details about land, water and the depth of the water up to a point, but every so often there is an area in front of glaciers where there isn’t data available. Any kind of data. It is just blank. There is no data here because when the charting work was done the glacier front was still there. Subsequently, two to three miles of glacier have disappeared. If boats want to approach the glacier front they have to sail extremely slow and carefully, as there might be rocks in these unchartered waters. When the depth sounder indicates that the water is getting shallow, the ship has to retreat and take another. There is no need to witness glaciers retreating – the lack of chart data makes it is obvious enough that landscape has changed since first measurements were taken.

The Antigua records the sea depth when going through shallow waters. The depth sounder is connected to the computer, and the computer logs the depth data with the GPS data and time. Information is shared among colleagues, but nothing is official. No measures will end up on a chart, as these instruments aren’t certified. To give exact measurements you need to have the GPS position and depth sounder exactly ot the same spot. The depth sounder is under the foremast and GPS in the wheelhouse – a difference of 20 meters distance. If considering the position of a dangerous rock, this difference could be dangerous.

The Sysselmannen, the government of Spitsbergen, organizes the charting in Spitsbergen. They have the PolarSyssel (which goes pretty deep) and Hydrograph and smaller boats. Areas which are frequently visited are updated regularly. They don’t have the capacity to chart all areas, so there are areas of Spitsbergen where still no detailed charts exist at all; such as the northeast corner and the east coast. Glaciers or not, it was commercially unlucrative, so they put minimal work into charting the area. Also in areas which are frequently visited by boats blank parts on maps can appear because of the melting glacier ice.