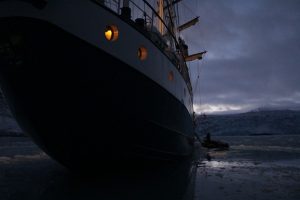 Who discovered Spitsbergen? And why is it important?

Norwegians, Russians and the Dutch claim to be the ones who discovered the archipelago.
Since the 1800s Norwegian historians have claimed that Vikings, who were active in the surrounding area, were the first to discover the archipelago in around 1194. These historians refer to maps where “Svalbardi” was mentioned as a four days sail away from Iceland. However, no physical evidence has been found by archaeologists in support of this theory.

Russian historians claim the Pomors, hunters and fishers from the north of Russia and active in the Arctic regions, were the ones who discovered the region and had hunting stations as early as the 1400s. Pomors were the first Russian trappers and thought they had reached Greenland when they were on Spitsbergen. They considered it one island and called it “Grumund”, meaning ‘big rounded snowball’ in old Russian. Nowadays many Russians call it Spitsbergen, although the people from the northern part of Russia still call it Grumund. As with the Viking claim, no historical or archeological physical evidence can be found to support this hypothesis.

The earliest recorded encounter with the region was in 1596 by the Dutch explorer Willem Barentsz and his team of explorers, on their way to China. His first experience in Spitsbergen was with a troublesome polar bear, after which one of the islands was named ‘Beer Eyland” (Bjørnøya). Afterwards they reached Spitsbergen somewhere in the northwest, naming it “Spitsbergen”, after the pointed mountains.

He then travelled further east and had to spend winter on the north coast of Novaya Zemla during which time several men, including Barentsz himself, died. The others made it back to Holland. Remains of the hut they spent the winter in on Novaya Zemlya have been found, but there are no archeological traces dating back to Barentsz’ visit to Spitsbergen.

Why is naming important? Some claim the Norwegians renamed Spitsbergen ‘Svalbard’ in 1967 for political reasons – it is easier to dig for and claim resources like oil from the region if it appears to be Norwegian.